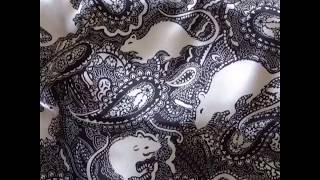 A new customer had a few specific requirements before she ordered one of my paisley "rat bags". She asked for strap attachments so that she wouldn't lose the bag when she went to concerts. She also had a preference for the type of fabric used for the lining. I was happy to try and make her bag according to all her specifications. I managed to find the right attachments for the strap and I printed the fabric she preferred for the lining, which was my William Morris style patte
0 views0 comments

Paisley Pattern Commission in US

A new fashion label in Virginia US commissioned me to design a paisley pattern for their logo. The label is called Vintage Duck Brand and they produce urban chic clothing for menswear and womenswear. Everyone was very happy with the finished result. Check out my web page dedicated to the project. There you will find a link to their website so you can view their excellent collection. #vintageduckbrand #paisley #logodesign #logo #virginia #fashion #paisleypattern #urban
2 views0 comments

The historic paisley skirt and shawl are on show in the Estonian National Museum (Eesti Rahva Muuseum). Thanks to my sister who took the photo on the left on her visit to the museum in 2015. The other photos are by Anu Ansu, Arp Karm. The man is wearing a Setu bridegroom costume from mid/late 19th century, which demonstrates the popularity of paisley shawls, not just in Western Europe but across Europe and Russia during this period. Estonia was part of the Russian empire at t
1 view0 comments

Very pleased to have a profile on the Front Row Society website. It's a great way to meet lots of other international designers who i chat to on a regular basis and share our design submissions, tips and advice. It's also a chance to be very experimental because the competition briefs are varied and promote originality and designing outside the box. Click here to order the leggings . #fashion #competition #leggings #textiledesigner
2 views0 comments

Submitted in March 2014 this design was my second entry to design a print for leggings for the Front Row Society, a fashion brand based in Berlin, Germany. I used a photograph from a trip to Ghana, Africa in 2013. I sliced the photo into thin strips and shifted them to give an interesting effect and unexpected colour changes. I love to experiment when I am creating my designs. Inventing new techniques and discovering skills online from other designers helps to keep my designs
1 view0 comments